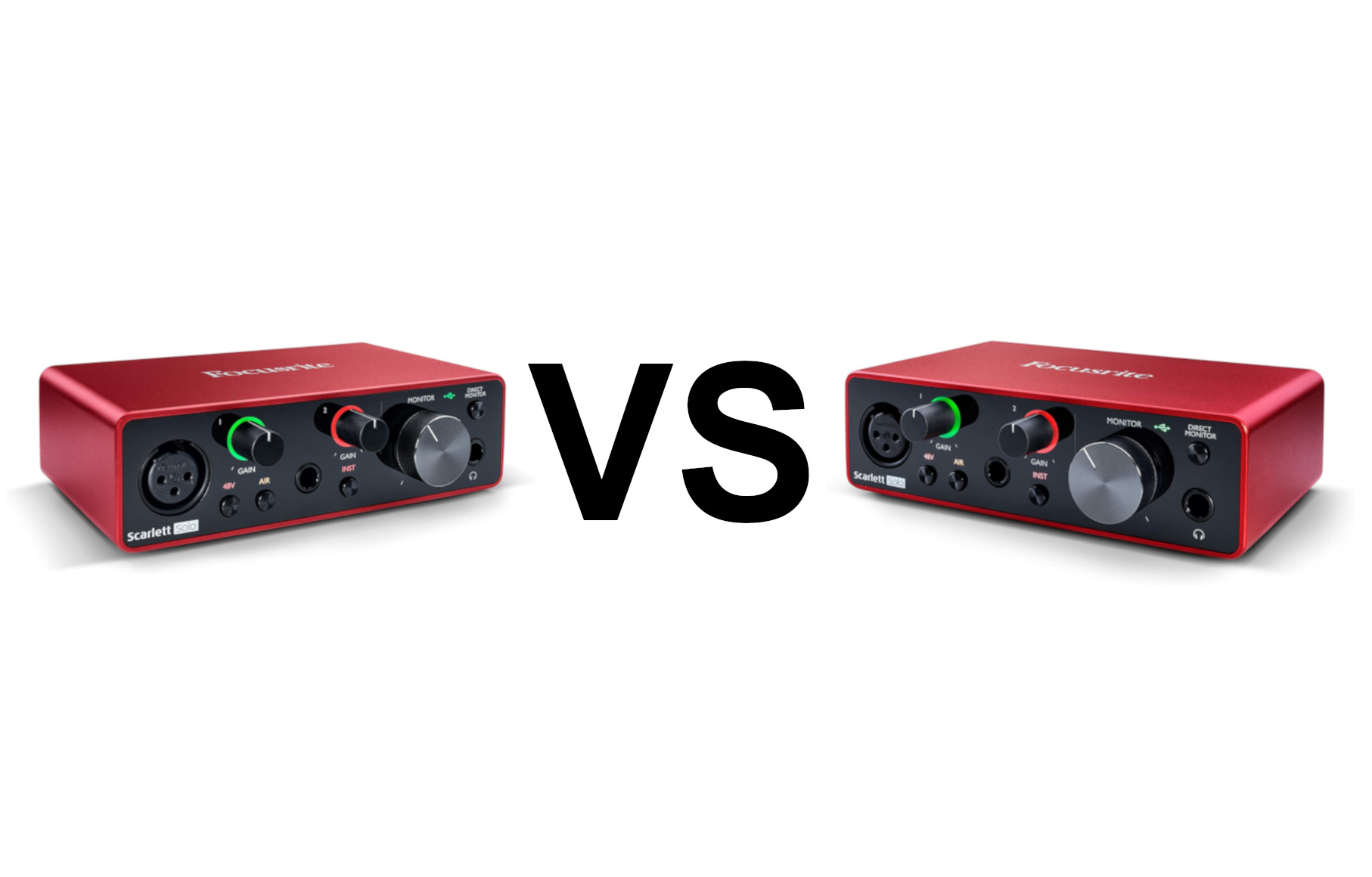 Focusrite’s Scarlett series has taken the audio interface market by storm with their striking red metallic designs and tailored variations to meet the unique needs of every artist and producer. In particular, creating affordable USB-powered interfaces.

Two favorites of the series going neck-and-neck are the Scarlett Solo and the Scarlett 2I2, both high-quality interfaces with many impressive features. However, with their many similarities yet significant price difference, which one is worth the investment?

Affiliate Disclosure: This article may contain affiliate links. We earn a small commission from any sales made through these links and we are very grateful to you if you choose to purchase one of our recommended products through these links. This helps us continue to run the site and create more great content to help you with your recording journey!

Which is better? Focusrite Scarlett Solo Vs. 2I2

The Focusrite Scarlett 2i2 is the better unit with two combination microphone / instrument inputs compared to only one microphone input on the Scarlett Solo. The 2I2 also features a volume control knob for headphone monitoring while the Solo does not. The sounds specs are identical on both interfaces with an exceptional sample rate of 192kHz setting them above many of their competition in the same price bracket.

When choosing which one suits your needs better, remember every producer or artist’s needs may differ. Looking at the specs of these two prized interfaces in more detail is the only way to truly make an informed decision.

Let’s begin with the more affordable audio interface, the Focusrite Scarlett Solo. This USB-powered audio interface is the simplest, most portable interface in the Scarlett range offering the perfect combination of quality features and budget price-bracket to get any producer or artist started on the right track.

The main body is built to last with an attractive red metal exterior with black plastic at the front and back surrounding the knobs and inputs. It only weighs approximately 360g and is highly portable, easily fitting in a backpack and handling on-the-go use.

How many inputs does the Scarlett Solo have?

At the front of the interface, the Solo features a single microphone XLR input with the best built-in mic preamp in the series, a high headroom instrument input, and a headphone jack. There are also 2 gain knobs, one for each of the main inputs, a button to activate the phantom power, and the classic master gain knob. Not to mention the Air button to activate the high-end booster in the pre-amp bringing life to acoustic instruments and vocals.

What are the ports on the back of the Scarlett Solo?

Completing the Solo on the back panel are the left and right monitor jacks and the USB power input waiting for you to plug in and get playing!

What software comes with the Focusrite Scarlett Solo?

The Focusrite Solo comes bundled with a fantastic software package including Pro Tools, Ableton Live Light, Focusrite’s Creative pack, and a few other gems to look forward to. It is compatible with both Windows and Mac and can plug into an iPad for easy on-the-go use provided that it has a USB-C connector or adapter.

Most importantly, the Scarlett Solo offers latency-free monitoring with high-quality sound output. The frequency response is impressive, ranging between 20Hz – 20kHz, making this interface stiff competition amongst others in this price bracket. The sample rate is also very high, supporting rates up to 192kHz.

For such an affordable interface, the Solo has a lot of impressive features, ready for you to get recording straight out the box. Here are some of the biggest pros to look forward to:

Every interface in the Scarlett range is high-quality and worth the investment. However, being the entry-level interface of the range, the Solo may lack a few features. The main downside being:

For a highly portable interface with all the basic features needed to play and record on the go, the Scarlett Solo is a great choice at a highly affordable price.

The next audio interface in the Focusrite Scarlett series is the Scarlett 2I2, another USB-powered audio interface with everything you need to record, both in-studio and on the go, fitting well in a backpack like the Solo.

Focusrite continues the signature look across the Scarlett series, with the 2I2 sporting the dazzling red aluminum case and the same black front and rear to tie it together. The 2I2 is slightly bigger than the Solo to accommodate the extra features, weighing in at about 450 g.

Just like the Solo, the Scarlett 2I2 features all the bells and whistles on the front panel with the two monitor jacks and USB connectivity on the rear end.

How many inputs does the Scarlett 2i2 have?

However, the 2I2 comes equipped with not one, but two combo ports with the best built-in preamps of the Scarlett series, both capable of taking microphones, lines, and instruments along with an Air button to add brightness.

The 2I2 also comes with a headphone jack with its own volume control knob, along with two gain knobs for each input and the classic large master volume knob for overall control.

What software comes with the Focusrite Scarlett 2i2?

This interface also comes fully kitted out with all the software you will need to get started out the box including the Focusrite Creative Pack, Pro Tools, Abelton Live Lite, and a few other exciting additions. Just like the Solo, it is also compatible with Windows, Mac, and iPad.

Finishing off this Scarlett Series favorite, the 2I2 offers latency-free monitoring with an outstanding frequency response range of 20Hz – 20kHz and a high sample rate of up to 192kHz. With such a full package, the 2I2 is highly affordable for the quality, coming in at just under $200.

There are many great features worth highlighting of this audiophile favorite. Here are the top pros you can look forward to when purchasing the 2I2:

There isn’t much negative to say about the 2I2, it is a favorite for a reason. However, the one thing that is worth some attention is:

The Focusrite Scarlett 2I2 is a favorite amongst musicians and producers and is the most sought after in the series for such a good price.

Focusrite Scarlett Solo Vs. 2I2

The Scarlett Solo and the 2I2 are both high quality and highly portable, with exceptional latency-free sound, setting them a bar above their competition. Between the two interfaces, the 2I2 is slightly pricier and slightly bigger than the Solo. However, both are well-priced for their excellent features.

The Solo has one microphone input with the famed built-in preamp of the Scarlett range and one instrument input, while the 2I2 features two combo inputs compatible with microphones, lines, and instruments, each fitted with the same preamp as the Solo. Along with the added mic input, the headphone output on the front face of the 2I2 includes a volume control knob, while the Solo only has the output port without the added control.

The build quality are both the same with the only difference being the size of the 2I2 to accommodate the extra features. Despite this size difference, the 2I2 is still nice and compact for good portability and can easily slide into a backpack just like the Solo. However, the Solo still wins in this regard with almost 100g off it in weight comparison.

Both interfaces are equal in sound quality with the exact same frequency response range of 20Hz – 20kHz, and a high sample rate of 192kHz including latency-free output for smoother recordings. The software packs included with each of these are largely the same, and both are compatible with Windows, Mac, and iPad.

At the end of the day, if the price isn’t an issue, the Scarlett 2I2 is the way to go with more versatility and recording options for those needing to record more than one instrument at a time, while the Solo is better suited to those needing a quick, plug-on-the-go interface for microphone recordings or single instrument recordings at a lower price.

To help you decide which one is worth the investment for your recording needs, here is a chart comparing the specs of the Solo and the 2I2:

In audio, latency-free refers to the ability of a device to produce zero latency upon requesting a signal. This means that the signal responds immediately as requested without any lag, or latency, in between. For example, if you press a key on a MIDI keyboard, and the sound responds without delay, this is a latency-free signal.

What is the Focusrite Scarlett Solo used for?

The Focusrite Scarlett Solo is predominantly used for plugging in a guitar or miking up a guitar for studio-quality recording. However, it can be used for a wide range of instruments and recording vocals. It is a popular choice amongst guitarists needing a highly portable set-up.

Is Focusrite a good interface?

Focusrite interfaces are among the most popular brands for producers and recording studios worldwide. Their range spans from highly affordable, portable USB interfaces to higher price-range analog interfaces, most with the signature red look appealing to many fans.

Yes, Focusrite uses top-of-the-line preamps on all its devices. One of their best preamps used in the Scarlett range is the OctoPre Dynamic 8-channel Microphone Preamp & Compressor giving these interfaces an incredible sound.

Although the Scarlett 2I2 is the interface with more features, consider which interface works best for your needs before forking out more money for features you don’t need. Both interfaces are well worth the investment, the choice comes down to what you want to plug into them, and how many at a time.

For guitarists needing to record their guitar either directly or with a microphone, the Solo should be more than good enough and is much more lightweight and portable for those on-the-go sessions. However, if you need to record vocals and guitar at the same time, or plug in two instruments simultaneously, the 2I2 is the way to go. Either one is a win!

link to What Equipment do I need to Record Music? (Our Top 10)

Want to start recording your own music, but don't know what equipment you need? We have compiled a list of the most essential equipment anyone at any level needs to record and mix music. In this...

Continue Reading
link to What is the easiest DAW for beginners? [Updated for 2022]

Whether you are just getting started producing music or transitioning from outboard analog gear to digital music production on a computer, you’ll need to select the right software that’s the best...