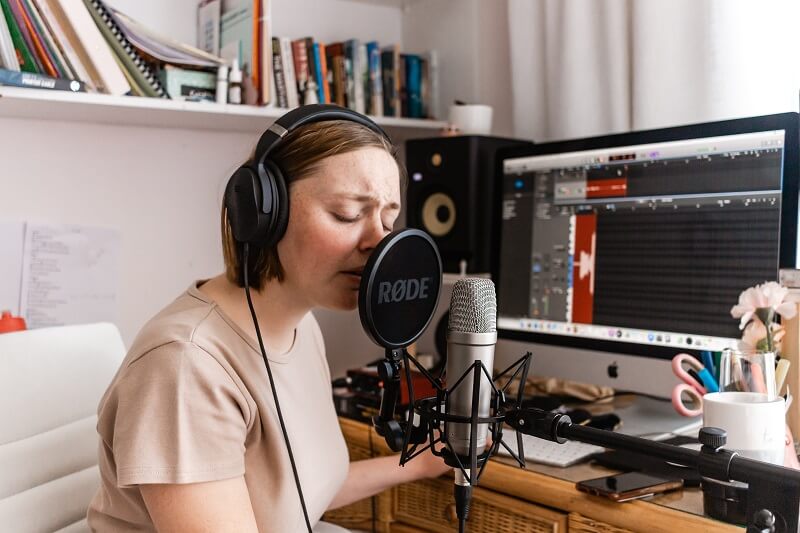 You wave goodbye to your client after what seemed to be a successful recording sesh. With a smile on your face, you open up the project file and begin to play what you thought was the best take of the day. To your utter horror, the take is riddled with pops that make the hair on your neck stand up. You shudder at the thought of your client hearing this. What do you do?

Firstly, don’t be alarmed, as these intrusive sounds can happen to any producer, no matter what experience level or how much fancy equipment you may or may not have at your disposal. Secondly, there is a cure!

But before you wonder how to remove pops from vocals, you should be thinking about how to prevent pops in vocals. Then, by all means, go ahead and remove any pops that worm their way onto the track.

Read on to discover how to remove pops and plosive from vocal recordings, and how to reduce them in the recording phase.

How To Remove Pops From Vocals

To prevent pops in your vocals during recording always use a pop filter on the microphone and make sure your setup suits your vocalist’s style and strength.

During the mixing phase, you can either roll off the low frequencies of the entire vocal track using a high pass filter, or you can isolate each plosive. Fade in on the isolated plosive, or add a sharp high pass filter to each pop, removing it from the vocals.

Keep reading to find out what causes pops and clicks, how to prevent them from rearing their ugly heads, and how to get rid of them when they do.

What causes clicks and pops in audio?

Now, before you can tackle getting rid of pops and clicks head-on, you need to grow your understanding of what causes them in the first place. Prevention is always better than cure.

Pops and clicks, more formally known as plosives, are caused by short bursts of air expelled from the mouth when pronouncing certain letters like “B” and “P.” These letters require the lips to press together allowing air to build up before being pushed out towards the microphone.

Sudden bursts of air against the microphone’s diaphragm cause an explosion of low-frequency energy which translates as a popping or clicking sound in recordings, causing havoc in the final track if left untreated.

You may find that some vocalists don’t create many pops at all, while others result in a myriad of pops, clicks, and hisses. This is because some vocalists have different techniques and may move closer and further away from the microphone during the session.

Moving closer and further away from the mic while recording, or simply recording from too close, allows more of the air bursts during pronunciations to hit the microphone, causing the infamous pop sounds.

Luckily, there are many ways to get rid of pops and clicks in vocals, even if you do have a strong vocalist that likes to sway to the rhythm. Preventative measures are important to take to give yourself a fighting chance, but if it’s too late for that there are still plenty of ways to learn how to remove pops from vocals to salvage that perfect take.

1. Avoid plosives with mic changes and a pop filter

Always start your plosive reduction methods by trying to reduce the chances of recording them in the first place. This is far easier than the grueling hours spent trying to remove them from the recording once the damage is already done. Here are a few ways you can avoid recording plosives:

Reduce pops and plosives on vocal recordings with a pop filter

The easiest way to reduce plosives from your recordings is by attaching a good quality pop filter to your microphone. A pop filter is designed to divert the bursts of air that cause plosives while recording.

If you are looking for a great quality traditional pop filter, we recommend this EJT Pop Filter (Affliliate Link) at a very reasonable price and with over 3,800 positive reviews it’s an excellent option.

Adding a microphone shield with a built in pop filter (affiliate link) has the added advantage of reducing ambient room noise from your vocal recording as well as reducing pops and plosives.

Switch out your condenser mic for a dynamic mic

Condenser microphones function with the subtle vibrations of a membrane, allowing it to pick up the slightest of sounds. This also makes it highly sensitive to unwanted frequencies caused by bumps, air bursts, and background noise. Dynamic microphones are far more robust and can handle quite a bit more intensity before translating these unwanted frequencies.

If you have a powerful vocalist coming to the studio, try switching out your condenser mic with a dynamic mic to allow for more leeway and expression while softening any plosives.

Enable the roll-off switch on your mic or preamp

If you have a low-frequency roll-off switch, also known as a high-pass or low-cut, on your microphone or preamp, you might as well put it to good use when you are recording. This switch can reduce the microphone’s sensitivity to low frequencies in the plosive range, helping to soften any pops and clicks you may record.

2. Fix it in the mix by rolling off the low end

Once the damage is done and you have a recording riddled with pops, the best way to start removing them is by applying a high-pass filter to the entire vocal track. Simply insert a steep high pass filter to the vocal track, focusing on removing frequencies below 100-150Hz. This should work nicely to remove most mild plosives in the predominantly low-frequency range.

However, bear in mind that removing frequencies above 150Hz may thin out the vocals quite substantially, so it is better to only do so in extreme cases and keep it isolated to the smallest area possible.

3. Split the clip and fade in on the plosive

When you are dealing with more extreme pops in your recording and you don’t want to risk thinning out the vocals there are more surgical maneuvers you could use.

One handy method involves splitting the clip and fading in on the plosive. This works very well when the plosive is at the beginning of a word in the vocals.

This method works like a charm, but if you have multiple plosives along your track you may find yourself hard at work, removing pops and clicks like a surgeon for hours on end. We recommend keeping this trick for those annoying fly-away pops, but if you have the patients to split-fade-repeat, why not give it a try.

4. Isolate the pop and add a sharp high pass filter

Another handy maneuver you can use to remove plosives from your vocal track is by isolating the pop and adding a sharp highpass filter to remove the low-frequency shelf of the pop alone. This works very well and can be used when the pop occurs in the middle of a word.

When you apply a high pass filter to the entire track hoping to remove plosives, you can end up thinning out your vocals more than you’d like, but with this method, you can cut away the low end of the pop itself without affecting the rest of the vocal track.

5. When all else fails, try ducking the pop

Unfortunately, some methods can backfire, messing up the sound of the voice with no way to repair it. In these extreme cases, the one other method you can fall back on is ducking.

When a plosive is in the middle of a word and adding a high pass filter to the isolated pop doesn’t work like you’d hoped, ducking is the backup plan to set things straight. Split the plosive into its own clip before reducing the gain on the isolated area. You can also automate a gain change to the area.

You can add a crossfade both in and out of the clip to reduce problems with the level change and smooth in the clip better. If you still have problems with the low-end causing unwanted sounds, you can add a high pass filter to the isolated area as well. However, in most cases, this won’t be necessary and should be kept as a backup plan when all else fails.

How do I remove plosives?

You can remove plosives from an audio track using various mixing techniques to isolate and lower the intensity of each plosive, or you can apply a high pass filter to the entire track to remove low frequencies between 100-150HZ.

How do you get rid of saliva sound when recording?

Saliva sounds are inevitable, but they can be reduced significantly during the recording phase using a few techniques. Some techniques you can try to reduce saliva sound during recording are:

How do I stop my mic from popping?

There are various ways you can reduce popping sounds from translating through your mic and onto your recording. Here are the best ways to stop your mic from popping:

Why is my mic making popping noises?

Why is my audio popping?

There are a number of potential causes for audio that is popping through your computer system. CPU overload and outdated drivers are common causes of popping audio within your DAW. There may also be a problem with your hardware, including microphone ports, wires, or the equipment itself. If there are recorded pops along an audio track within your DAW, they may have been recorded from the vocalist’s techniques or lack of a pop filter on the microphone.

Pops, clicks, and other annoying unwanted sounds during a recording session can really set you back, and leave you second-guessing your experience as a producer. Just remember, anyone can record unexpected sounds during a successful recording session, no matter how experienced they are, how good their gear is, or how talented the vocalist is. These things happen, and what makes you a good producer is knowing how to handle them!

Phantom power is one of the mysterious forces to learn about in the audio recording and production world! In this article we’ll discuss what phantom power is, how it works, and do all microphones...