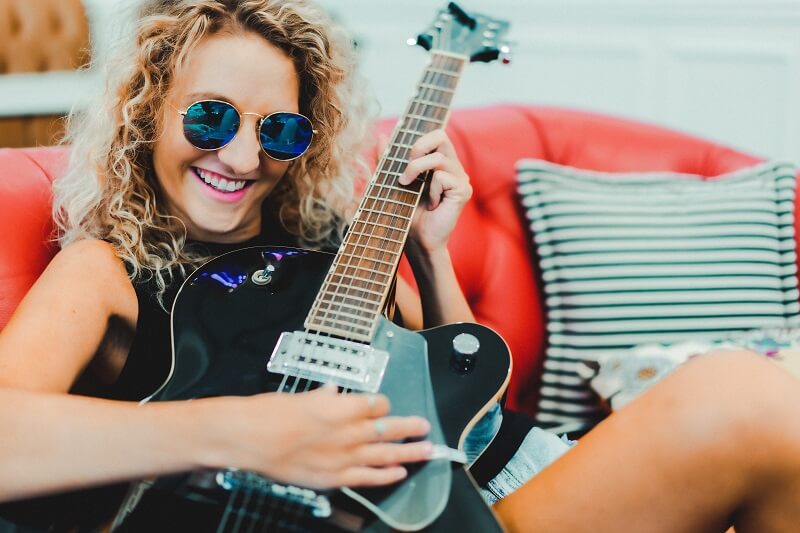 Generally, recording an electric guitar is a simple enough process that most of us are familiar with. You plug your guitar into your amplifier, make sure it sounds good and move on to setting up the mic. You mic up your amp with one or two mics, do some testing, and there you go. Ready and set, right?

Not quite, if you’re producing music at home or in a small space cranking up an amp might not be possible. Or maybe you don’t even have a guitar amp – but still want to record guitar.

How can you record these killer riffs in your head without an amp? Is it even possible?

Read on to find out how!

How To Record An Electric Guitar Without an Amp

To record without an amp you need an audio interface, (or an external soundcard), and digital modelling guitar amps installed into your DAW. You can also use a DI Box plugged into an audio interface or mixer for the same result.

Keep reading to find out more about how you can record your electric guitar without needing an amp or microphone, what the pros and cons are of either method is, and what software you can use for the best results. There are a few things to watch out for and techniques that can help you get the best results that we’ve outlined below.

You may be used to recording with an amp and microphone, however, switching to recording without an amp is a lot simpler and less time consuming than setting up the amp and mics every time you want to record. If done right it can also yield a better, more creatively flexible result.

One of the two ways you can record your electric guitar without an amp is by plugging it into a direct box, or DI box, which will be connected to an interface.

Once the signal reaches the interface through the XLR output of the DI box it can be transported to your DAW with, most commonly, a USB connection depending on your interface. There you can use a digital amplifier to transform it into the sound you want!

The second way you can record your electric guitar without an amp is to use an audio interface. An audio interface is simply an external soundcard. These are essential tools for any audio producer, especially those working from a laptop or tablet, to transform sound into a digital signal and back again.

An audio interface generally comes with a few input options, including both XLR and TRS compatible inputs. Some audio interfaces even come with a built-in DI input, although it is not usually as powerful as a separate DI box.

You can also adjust the gain of whichever instrument you have plugged in to get an optimal recording level, high enough for a low noise level and low enough to avoid distortion. These gain knobs are referred to as pots.

On the other end of the spectrum of these devices are the output jacks and the volume knob. The output jacks are located on the back of the audio interface and are generally compatible with both studio monitor speakers and headphones as well.

Another important feature that makes these devices a must-have for any producer is the phantom power built into the device. Phantom power is essential if you are using a condenser microphone as the mic can’t function without external power.

All you would need to do if you use this method is plug your guitar directly into the audio interface, adjust the gain, and hit record on your DAW. You can experiment with the sound using different digital amplifying plug-ins.

The last piece of the puzzle when you record without using an amplifier is, no surprise, a digital amplifier. This part of recording is possibly the most important as it is where you can personalize your sound and get your guitar sounding professional.

A digital amplifier is an amp plug-in, or amp simulator, in your DAW that you can use to adjust your guitar sound in many different ways. The simulated amps, or amp plug-ins, will have all the bells-and-whistles that an analog amp will have.

The main thing to look out for when using a digital amp is choosing a good one as they are not all created equal. For a professional sound, you want to use a well-built plug-in that can give you the sound you need. A lot of the time, the paid plug-ins will be better, however, there are some good free digital amps you can try.

Some examples of good digital amplifiers include:

These three digital amps are just three of the many popular, good quality plug-ins you could try. For a longer list check out this Guitar Amp Simulators 101 guide. The best thing to do is try a few out until you are happy with the sound you can achieve.

What Happens When You Record Without an Amp?

When you record without an amp your signal records directly from the electric guitar into your interface and DAW instead of relying on a microphone to record the sound. This lowers the risk of picking up interference, noise floor, and background noise.

A direct signal is clear and often sounds a lot brighter than when you record using an amp and a mic.

Pros and cons of Recording without an amp

Is Recording Electric Guitar With an Amp Better?

Both methods can yield professional results when done correctly, so it comes down to preference and circumstances at the end of the day.

Pros And Cons of Recording With an Amp

How to Avoid Latency When Recording Without an Amp

Latency can be a massive downer when you are in the zone and suddenly face a noticeable lag between your strings and hearing the note, so, how do you fix it?

To fix latency you have to figure out what is causing it. Some of the biggest causes of latency when recording is poor quality or damaged audio interfaces, monitors, or plug-ins. Try and rule out each problem one-by-one until you notice a difference.

If you suspect that none of your hardware or plug-ins are the problem then it may be something a bit more complicated like a setting or a driver. Here is a useful source with some easy fixes for problems with latency regarding drivers.

If you are on the fence, there is a bonus hack for a high-quality, full-sounding electric guitar recording! Simply combine two recordings of your guitar, one through an amp using a microphone, and the other directly through your interface or DI Box.

This method will give you the quality and density of the mic recording and the clarity and adjustability of the direct recording giving you full reign over the sound you want to create.

If you have the means and equipment to record with an amp and microphone, you may as well make use of this tip to get the most out of your guitar recording. Maybe it’s more effort, but give it a shot and see how it sounds. It may just be the best of both worlds you’ve been looking for!

If you’ve recently found yourself stuck without a mic or an amp, hopefully, this article has shed some much-needed light on how to record without an amp.

At the end of the day, recording without an amp is much easier and straight forward than recording with one. You can start playing in seconds and let your creativity flow without the set-up hurdles you may face when recording with an amp and mic.

If you were just curious and have access to an amp, why not try something new and play around with combining both recording methods? You’ve got to keep up that healthy creativity, right?

Can electro-acoustic guitars be played without an amp?

Yes, electro-acoustic guitars can be played without any form of electrical output as they still have an acoustic body.

Make sure you have headphones or speakers plugged into your audio interface to be able to hear your playing amplified without an amp.

How can I record my electric guitar at home?

An audio interface is the best way to record your electric guitar from home. They take up very little space and are simple to use.

Simply set up your interface with your computer, then whenever you want to play or record your electric guitar you can plug it straight in and instantly play.

Why do you need a guitar amp?